When it comes to humans, we desire the rare, the unique and the extraordinary above all else. Don’t we? Uniqueness and rarity increase the value of any product. And when things get shrouded in glamour and elegance as diamonds are, they become even more coveted. What’s more is that an object as lovely as a colored diamond will only become more irresistible and valuable with time.

How are diamonds priced

Diamonds have always been seen as precious. Their value is determined by the cut, clarity, color and carat value of the stone. But the actual price of diamonds varies according to fluctuations in economic activity. Disposable income, changing market trends as well as consumer demands are all factors that in one way or another determine the price of diamonds. Also, it is important to note that diamonds hold more value if they are certified or verified as natural by a gem expert and if they are rare.

The value of colored diamonds

Colored diamonds command a high price, being the rarest of a rare breed of precious stones. This disparity in price is clear between regular diamonds and the colored variety. If the price of a VS1 one-carat clear diamond is around 5000 dollars, the price of a vivid one-carat yellow diamond will be 10000 dollars. There is, however, a huge variance in how expensive colored diamonds are; rare, bigger size, and greater quality commands higher prices.

There has been a nearly steady growth in price of plain diamonds in the past ten years, with prices rising 30 to 33 per cent in the last ten years. Meanwhile, the prices of colored diamonds have seen more spectacular growth, rising by 122 per cent on average.

We can see a disparity in price increase according to the size and color of the gem. On average the value of larger sized gems increased more than smaller sizes. The price of some colors of diamond showed a higher increase than others.

Diamonds as an investment and emerging markets

The price hike in colored diamonds in the past ten years is due to a number of factors. These include higher demand for diamonds in emerging markets as they gain more financial viability and also as a valuable addition to any investment portfolio.

A growing middle class which hankers for the finer things in life, especially in countries like China and India, fuels the growing increases in demand and prices of diamonds. China especially is seen to be a rapidly expanding market for diamonds. It is currently the second-biggest market after the United States. The upward trend in demand from emerging markets as well as the continued popularity of diamonds in the US and Europe means that the demand for diamonds is growing.

Celebrates may fuel a sharp price hike endorsing or publicly displaying a particular color of the diamond. This price change is usually temporary and levels of in a relatively short span of time. But repeated use of colored stones such as the pink and yellow diamonds have meant that their prices just keep on getting higher.

For example, interest in pink diamonds showed a dramatic spike when Ben Affleck presented Jennifer Lopez with a radiant cut pink diamond engagement ring. Jennifer Lopez was also presented by Marc Antony with a magnificent 8 .5 carat blue diamond. Pink diamonds also adorn the hands of entertainers and celebrities such as Victoria Beckham and Mariah Carey, who frequently air out their massive pink sparklers.

Diamonds are mined or found in places like Canada and Africa, Russia, South America, India and Australia. Russia produces the highest volume of low-quality rough diamonds. While Australia produces the most volume and highest quality of colored stones in the world from a single mine.

Diamonds are created from carbon over thousands of years under great heat and pressure. Diamonds can be replicated in labs, but these synthetics have a relatively lower value. Like any other natural resource, diamonds are a finite material. They occur only in areas that were affected by volcanic activity in the past. New kimberlite pipe, the volcanic veins that push the diamonds to the surface, are rarely discovered.

No substantial new discoveries, current mines being nearly exhausted and depletion of stockpiles by diamond merchants such as DeBeers mean a reduced supply of rough colored diamonds.

Closure of the Argyle Mine

The world loves colored diamonds. The desire for these colored gems is only going to increase as there have been no new diamond deposits found just as the demand is continuing to surge around the globe. 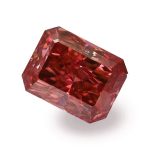