Purple diamonds are glorious in their royal beauty and command tremendous value in the gem market. They are also known by the marketing terms of plum, orchid, lilac, and grape colored diamonds. They owe their incredible color to the addition of trace amounts of the elements, hydrogen, and boron. It is speculated that intense pressure during formation may also be a reason for the unique hues of colored diamonds such as the purple gems.

The royal shade is highly demanded given that it is elegantly gorgeous in its intensity. Moreover, natural colored stones are in very short supply and command vast sums of money when they do come up for retail. It is thought that a true purple may be nearly as rare a jewel as the reds, of which there exist only about thirty in the world. Synthetic and color-treated diamonds are slightly more available and also have prices that one can afford.

Synthetic diamonds sometimes have a faint orange tint to them, which is discernible to the trained eye. Fancy Purple diamonds most often crop up with secondary hues such as grayish or pinkish purple. The value of colored diamonds with a secondary shade is somewhat less than a pure single colored stone. However, since the genuine single-colored natural gemstones are few and far between, most diamonds available will be tinted by another hue.

The purple diamond, like other colored diamonds, ahttps://talore-diamonds.com/product-category/pink/re rated on the Gemological Institute of America’s color scale, which ranges from faint to fancy dark or fancy vivid Purple diamonds with worldwide fame include the magnificent VS2 clarity fancy intense Purple Orchid, which weighed 3.37 carats after being processed from a 4-carat rough diamond. It held an asking price of 4 million at the 2014 Hong Kong Jewelry and Gem Fair, where it was sold for an undisclosed amount. The Royal Purple Heart is another famous purple diamond. It is an ornate fancy vivid massive purple sparkler surrounded by mystery. At the same time, the Supreme Purple Star is another diamond shrouded in mystic allure as the public only knows that it has a unique red and purple combination of color and weighs between 2 to 5 carats.

We should begin the rundown with a stone that surprised the world with its appearance in the 2014 Hong Kong Jewelry and Gem Fair. Beginning from an undisclosed mine is South Africa, (one of the not many areas universally where unadulterated purple diamond can be discovered), the stone began as a 4 carat harsh. A precious stone of this legitimacy required a while of cautious slicing and cleaning to uncover its actual inward excellence.

When handling was finished, the Purple Orchid had been changed to a really sublime 3.37 carat, pad cut, VS2 clearness Fancy Intense Pink Purple gem. It’s a given that purple diamonds of such bore and weight are viewed as a genuine irregularity among the universe of normally hued jewels.

The Purple Orchid would in the end be sold at the 2014 Hong Kong Jewelry and Gem Fair where it held a $4 million (around $1.2 million/carat) asking cost, anyway the last selling cost and winning bidder despite everything stay unveiled.

Other than it being evaluated as a Fancy Vivid Purple by the GIA and considered as the biggest purple diamond to ever be found, very little else is thought about the Royal Purple Heart.

Both the present proprietors of the stone, and the cost paid for it are as yet uncovered. The mine of starting point is likewise an extraordinary secret, anyway it is hypothesized that it lives some place in Russia.

The Supreme Purple Star is regularly named the lord of every single purple jewel. This precious stone, whenever took a gander at not quite the same as points, can seem dark red or purple.

It originally showed up in 2002 in London, where a mysterious vender accepted the precious stone was simply one more conventional gemstone. Indeed, the subtleties given on the stone by the merchant at closeout were exceptionally strange.

The main end that made sense was that the precious stone contained two separate hues, purple and red in a similar stone, which had never been seen.

The Supreme Purple Star Diamond shows a splendid slice and weighs between 2 to 5 carats, as the specific weight has never been uncovered. Until this point in time, the nation wherein the precious stone was discovered, the date of disclosure, and the qualities of the jewel stay a secret.

Notwithstanding, numerous specialists in the field accept that the precious stone started from the Amazon in any event 25 years prior. With all these uncommon highlights, the Supreme Purple Star is evaluated to be worth $4 million for each carat, setting its incentive at somewhere close to $8-20 million.

In the event that you appreciated this article look at some other extraordinary peruses from the rundown beneath. What’s more, as consistently don’t hesitate to tail us on Facebook and Twitter.

Albeit purple diamonds have been found on voyaging vendors, in different gem dealers and retail locations everywhere throughout the world for quite a long time, the spots from which they are inferred are not many. Actually, reports and details demonstrate that 100% characteristic purple jewels begin exclusively from precious stone mines situated in Canada, Russia and Australia.

Genuine characteristic purple precious stones represent about 1% of all jewels mined from Serbia, Canada and Australia. In this manner, they run a nearby second in irregularity to the normal red precious stones. Be that as it may, their irregularity has little impact on their developing prominence. As per details exhibited by adornments retailers, private goldsmiths and gemstone experts, these precious stones, and gems produced using the lavender stones, are in the best three most famous jewels in the precious stone class, and in the main 10 generally looked for after gemstones.

Their fame keeps on ascending; inside the most recent two years, adornments stores and experts have almost multiplied the deals and shipments of free purple diamonds and gems made with them. The quantity of individuals who guarantee to be precious stone authorities is on the ascent, similar to the quantity of gatherers who look for these stones explicitly in purple, lavender, lilac, and plum tints.

for more color diamonds visit us 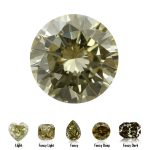 Are Chameleon diamonds worth your investment?

Colored diamonds are very rare and expensive than regular diamonds. As the name indicates, a chameleon diamond is a gemstone that changes its color. For