There are natural fancy colored diamonds in almost all colors of the spectrum. Overall, there are 12 different colors and 230 different color combinations made possible due to the difference in hues and saturation. While yellow is the most common of them all, red diamonds are said to be the rarest. Hence, it is not a surprise that they are highly sought after by diamond enthusiasts, collectors, and investors. Plus, given the enthralling nature of the diamond and its appeal, almost everyone wants to gift it to their loved one. Don’t you too as well?

Red diamonds are composed of pure carbon, just like colorless diamonds. They gain their incredible color from anomalies in their molecular structure. It is speculated that unusual amounts of intense pressure during a shorter period may also have contributed to the unique atomic structure of the colored diamonds. This is odd since most colored diamonds derive their color from impurities such as boron and nitrogen.

Red diamonds have been found in Russia, India, and Brazil, as well as from the Argyle mines in Australia in more recent times. It is clear from this that red diamonds are extracted from only a handful of places.

When red diamonds are sourced from underground mines and light is allowed to pass through the lattice, the bending of light occurs in such an unusual manner that the diamond appears to have a ruby like color. The fact that red diamonds look different in different lightening environments makes them more fascinating. You just can’t get bored looking at them. Such is their allure.

Genuine fancy red diamonds are so rare that practically no one has ever actually seen one. Only a few fancy red diamonds exist in the world today. It is said that only about 20 – 30 red diamonds exist in the world and majority of them are around half a carat in size. The extremely rare nature of the red rocks means that they are the most expensive type of colored diamond per carat value. The price of a red diamond can range from hundreds of thousands to millions of dollars depending on the size of the stone, its clarity, color – ranges from dark pink to purplish red – and cut. 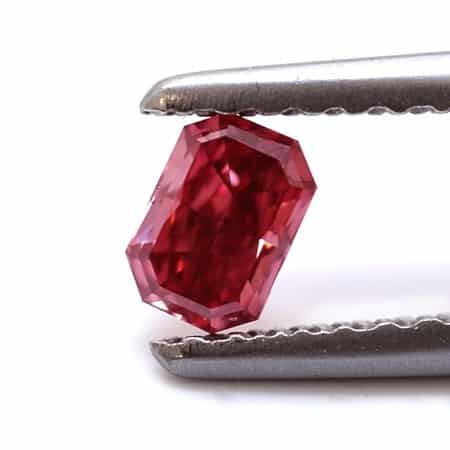 Red diamonds are rated on the four C’s on which all diamonds are graded; these are color, carat size, clarity, and cut. Red diamonds exist in only one intensity while the red color may have tints of purple, brown, and orange. The cut, as for all colored stones, is used to enhance its color as much as possible. Clarity is judged on the same scale as for colorless gems.

They are mostly used for investment purposes and are found only in the most exclusive portfolios of diamond investors and enthusiasts. Most red diamonds are found in small carat sizes. That is why red gems are the only diamonds considered for investment purposes in sizes of less than one carat. It is said that red diamonds are the most valuable per carat of all diamonds and their price per carat is at least one million dollars per carat. Given the limited supply and high demand, it is almost a certainty that prices of red diamonds will continue to increase. Hence, they are an ideal investment opportunity.

The most famous red diamond is the Moussaieff Red, which at a massive 5.11 carats, is an internally flawless gemstone. It is also referred to as the “Red Shield.” The Moussaieff Red is a triangular brilliant cut or trilliant-cut stone that was first discovered in the 1990s by a Brazilian farmer in the Abzetezinho River. It was acquired by Moussaieff jewellery firm in 2001 for diamond for $8million and that is where its name comes from. It is the largest red diamond in the world today.

The Hancock Red is a purplish red round brilliant cut stone that was named after it famous collector, Warren Hancock . While it is a 0.95 carats, which by any means is not the reason for it’s popularity, it is still one of the most famous red diamonds. Why? Because of it extremely rare purplish red color. It is said that Mr. Hancock reportedly paid $13,500 in 1956 for this diamond and it was again sold for $880,000 in 1987.

Another red diamond that is quite popular is the Supreme Purple Star. It is shrouded in mystic allure as the public only knows that it has a unique red and purple combination of color and weighs between 2 to 5 carats. Even the exact color and clarity of the diamond are not known. What makes it completely unique is that it looks absolutely different from different angles. From crimson to purple to red, the Supreme Star appears different, depending on how it is looked at. Safe to say, this characteristic of it makes it highly sought after. It is believed to be sourced from the Amazon. However, it is not known for sure where it was mined from, when was it actually discovered, and what exactly are the characteristics of this one of a kind diamond. It is valued somewhere in the range eight to twenty million dollars. It is as unique a diamond as it can get.

If you are looking for a red diamond, be it for investment, collection, or to feature it in your jewelry then browse through the amazing collection of natural red colored diamonds at Talore Diamonds online shop. It is guaranteed that you will find what you are looking for. After all, Talore Diamonds with it’s years of experience in the diamond industry hand-picks high-quality diamonds to provide to its esteemed customers.

So, what are you waiting for?

Hop onto talore-diamonds.com and get the best deal possible.

Jennifer Lopez has shown off an engagement ring with a 8.50ct massive green diamond after confirming that she is engaged with Hollywood star Ben Affleck